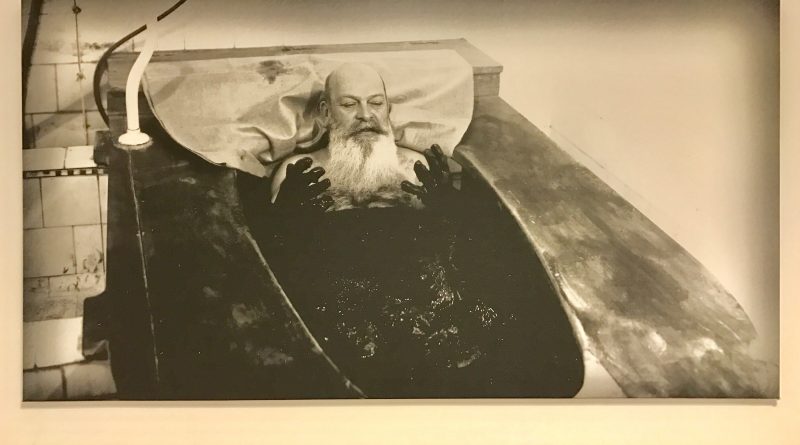 In Piestany, the long recognized healing power of the earth’s water has been harnessed to aid the people. And, Piestany is really serious about healing! A bridge on the Váh River connects the village to Spa Island which has several hotels, a park which runs the length of the island and a massive spa complex providing treatments for both relaxation and medical purposes. A person working there told me she has cried seeing people arrive in wheelchairs and leave on their feet. Evidence of this could be seen in old photos hanging in the hall, one of which showed a gallery of crutches that were no longer needed by previous patients.

Thermia Palace, is the oldest and fanciest place on the island. However, the other hotels are quite nice and EXTREMELY reasonable in the offseason. Danubius Hotels owns three properties on the island and had three day packages including lodging, spa services, and half board for about $170.

Which brings me to the story of a funny thing that happened in Piestany. While it’s true that I visit many hot springs, I generally stick to the natural undeveloped ones. I would generally never sign up for any kind of spa treatment as I’m not a person who likes to let others care for me. I’m a mountain man and sometimes a desert rat! Yet, a world famous Piestany mud pack came with my hotel booking so off I went.

I was already uncomfortable when I entered the room and it didn’t help when the Slovak man said solemnly, “remove all, sit.” There was a table covered with a sheet and a pile of mud where your butt and back are supposed to go. I laid down in the pile of mud and it was really hot!

This is difficult to write about without laughing!

Anyway, I laid in the mud and slid down into position. Then came more mud… LOTS of mud… poured over my limbs, literally gluing me to the table. He pulled the sheet around me and the mud, added a couple blankets on top of all that and wrapped me up like a mummy. The lights were dimmed and everything was completely still except for the sound of music that sounded like something from a futuristic Slovakian space cathedral. It was intense because my body was completely immobilized. I felt like I had been buried alive. Also, the heat from the mud and blankets had beads of sweat pouring down my face and I was relieved and appreciative when after a few minutes he returned to dab my face with a towel.

So, if you can imagine… naked, hot, mud, immobilized, relaxed, thankful for odd Slovak providing expert care. It was certainly strange and funny but also really wonderful. Do you know the feeling of savasana after a difficult yoga class? Or even just lying down in bed after a long day? That feeling of deadness in your body. When I learned that savasana means “little death” I decided to try pretending I was dead when practicing the pose and have had feelings of being completely out of my body when doing this… like my body was still on the ground but my spirit was hovering above. People talk about yoga as a connection of mind and body but I there is also value in separating the two. Meditation can be that way too… a way to leave the body for awhile.

I’ve already written too much but suffice to say, the mud wrap I hesitated to try ended up being one of the most profoundly relaxing experiences of my life and I walked away feeling like I was inside a brand new body. If you’re ever in the area… a stop here is much like the attendant’s instructions… not optional. Remove all, sit, and BE with the gifts of the earth!